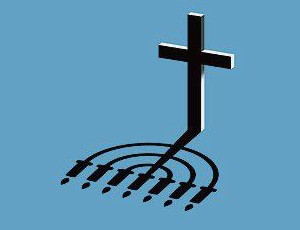 The ‘Christian-Zionist movement’ misleads many honest, good-hearted, Christians into believing that they MUST support the state of Israel, no matter what they do nor how they act. Supporting the Zionist state of Israel goes against the Bible and preaches false prophecies about how Jesus will return 3 times (instead of 2, as Scripture says).

Christian-Zionist supporters think (falsely) that the nation/state of Israel fulfills Biblical prophecy, especially in the “end times.” According to author Grace Halsell, Christian Zionists believe that “Every act taken by Israel is orchestrated by God, and should be condoned, supported, and even praised by the rest of us.“

Read the history of the ‘Christian-Zionist movement’ here:

Do you know how the Jews in Israel talk about Christ? Do you think they support the notion of Christianity? Learn the Truth of what Israel says:

Who is John Hagee?

Who is Jerry Fallwell?

Download this brochure that explains some of the dangers of the Christian-Zionist movement that does not follow Biblical teachings.
http://www.christianzionism.org/Doc-Brochure/NCC%20on%20CZ.pdf