There are many questions regarding the “election” of a Pope

, in 1958, after Pope Pius XXII died. Many Catholics (especially “Traditional Catholics”) today follow what is called, “The Siri Thesis” as they are trying to analyze the crisis in the Church. It is called a “Thesis” since it hasn’t been admitted by the Church…yet; however, that doesn’t mean that the evidence is lacking. There is a preponderance of evidence that should be considered in understanding what happened on that fateful day in 1958 when the White Smoke rose up from the stovepipe above the Sistine Chapel.

This information is compiled on the “Novus Ordo Watch” website:

We present the following items to help inform and educate and to make people ask questions about what truly happened after the death of Pope Pius XII:

Here are some of the things Cardinal Siri said in later years.

“Masonic infiltrations in the Church? I’m sure of it.” –Giuesepei Siri

When asked whether he had been elected Pope, Siri answered, “I am bound by the secret.  This secret is horrible.  I would have books to write about the different conclaves.  Very serious things have taken place.  But I can say nothing.” 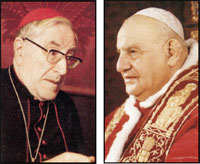 When offered to be taken to the America where people could help him, Siri said that would be impossible.  He could not go, because “they” could –– and would — kill him at any time.

The Mysterious Conclave of 1958
Was someone else elected before John XXIII?