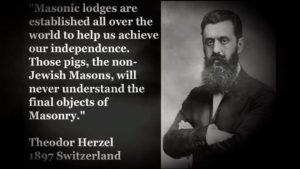 Wikipedia explains this about Freemasonry:
“The denomination with the longest history of objection to Freemasonry is the Roman Catholic Church. The objections raised by the Roman Catholic Church are based on the allegation that Masonry teaches a naturalistic deistic religion which is in conflict with Church doctrine.[86] A number of Papal pronouncements have been issued against Freemasonry. The first was Pope Clement XII’s In eminenti apostolatus, 28 April 1738; the most recent was Pope Leo XIII‘s Ab apostolici, 15 October 1890. The 1917 Code of Canon Law explicitly declared that joining Freemasonry entailed automatic excommunication, and banned books favouring Freemasonry.[87]

In 1983, the Church issued a new Code of Canon Law. Unlike its predecessor, it did not explicitly name Masonic orders among the secret societies it condemns. It states: “A person who joins an association which plots against the Church is to be punished with a just penalty; one who promotes or takes office in such an association is to be punished with an interdict.” This named omission of Masonic orders caused both Catholics and Freemasons to believe that the ban on Catholics becoming Freemasons may have been lifted, especially after the perceived liberalisation of Vatican II.[88] However, the matter was clarified when Cardinal Joseph Ratzinger (later Pope Benedict XVI), as the Prefect of the Congregation for the Doctrine of the Faith, issued a Declaration on Masonic Associations, which states: “… the Church’s negative judgment in regard to Masonic association remains unchanged since their principles have always been considered irreconcilable with the doctrine of the Church and therefore membership in them remains forbidden. The faithful who enroll in Masonic associations are in a state of grave sin and may not receive Holy Communion.” Thus, from a Catholic perspective, there is still a ban on Catholics joining Masonic Lodges.”

On December 8th, 1892, Pope Leo XIII wrote to the Italian Episcopal Hierarchy: “It is necessary to fight Freemasonry with those weapons of divine faith which in past ages vanquished paganism.”

Read more about the battle of Christ versus anti-christ at:

*This website exposes Freemasonry from a Catholic perspective but Christians must unite on the issue of exposing this evil no matter what “religion” they follow.

Many other denominations have continued to expose the evil of the Freemasonry secret societies.

Here is an informative Protestant book which details Freemasonry:

“One main difference between Freemasonry and Christianity is that Christianity holds that Jesus is everything, while Masonry teaches that He is nothing.”

Wikipedia continues:
“Free Methodist Church founder B.T. Roberts was a vocal opponent of Freemasonry in the mid 19th century. Roberts opposed the society on moral grounds and stated, “The god of the lodge is not the God of the Bible.” Roberts believed Freemasonry was a “mystery” or “alternate” religion and encouraged his church not to support ministers who were Freemasons. Freedom from secret societies is one of the “frees” upon which the Free Methodist Church was founded.[92]

Since the founding of Freemasonry, many Bishops of the Church of England have been Freemasons, such as Archbishop Geoffrey Fisher.[93] In the past, few members of the Church of England would have seen any incongruity in concurrently adhering to Anglican Christianity and practicing Freemasonry. In recent decades, however, reservations about Freemasonry have increased within Anglicanism, perhaps due to the increasing prominence of the evangelical wing of the church. The former Archbishop of Canterbury, Dr Rowan Williams, appeared to harbour some reservations about Masonic ritual, whilst being anxious to avoid causing offence to Freemasons inside and outside the Church of England. In 2003 he felt it necessary to apologise to British Freemasons after he said that their beliefs were incompatible with Christianity and that he had barred the appointment of Freemasons to senior posts in his diocese when he was Bishop of Monmouth.[94]

In 1933, the Orthodox Church of Greece officially declared that being a Freemason constitutes an act of apostasy and thus, until he repents, the person involved with Freemasonry cannot partake of the Eucharist. This has been generally affirmed throughout the whole Orthodox Church. The Orthodox critique of Freemasonry agrees with both the Roman Catholic and Protestant versions: “Freemasonry cannot be at all compatible with Christianity as far as it is a secret organisation, acting and teaching in mystery and secret and deifying rationalism.”[95]

Regular Freemasonry has traditionally not responded to these claims, beyond the often repeated statement that those Grand Lodges in amity with UGLE explicitly adhere to the principle that “Freemasonry is not a religion, nor a substitute for religion. There is no separate ‘Masonic deity,’ and there is no separate proper name for a deity in Freemasonry.”[96]

All of this ties into Zionism because the plan is for them to rebuild the temple, on the Temple Mount, in Jerusalem and then usher in their New World Order and The New Zionist Messiah – King of Planet Earth.

Read it in their own words in their Bible, Morals and Dogma:

“Through its golden portals shall pass the New Zionist Messiah, King of Planet Earth. Before its evil altar he shall announce to all the world, via television, that their Universal Savior has finally come, a man knowledgeable of “the Holy Kabbalah, the exclusive heritage of the people of Israel.” (Masonry’s “Morals & Dogma”, page 839).“
Taken from this website but you can read it for yourself anywhere.

“Jews have entirely created Masonry to corrupt the nations of Christian civilization and to propagate behind this veil the general revolution which is to bring about the domination of Israel. It is simply a tool and a means in the hands of the Jews. In support of this, we can quote the article of Dr. Isaac M. Wise published in the Israelite of America, 3 August, 1866: ‘Masonry is a Jewish institution, whose history, degrees, charges, passwords, and explanations are Jewish from beginning to end.’” – Quote from this book: 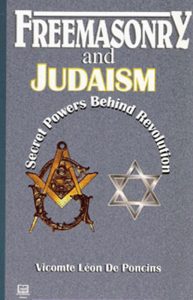 Freemasonry tries to claim that they are not a religion in this statement; however they are a “religion” when one understands their rituals and practices. This excellent video explains how their practices have resulted in many genocides throughout history and how their practices brainwash their members into the occult worship:

ALL CHRISTIANS SHOULD WATCH THIS VIDEO BECAUSE IT AFFECTS ALL!!!!!!!!!!!!!

Here is another great article for Catholics and all Christians of other faiths:

Freemasons and their craft: What Catholics should know

That article refers to this VITAL but inexpensive book:

This e-book explains the connection between Talmudic Judaism and Freemasonry:

Chapter 4 contains all of these topics on the Jewish Element in Freemasonry: