It is important to understand how the political movement of ‘Zionism’ started by Theodor Herzl has been portrayed to be about Judaism when it isn’t, at all.

The TRUE Torah Jews website gives many resources to help understand the important difference and which explains how the Zionist state of Israel is using Jews for their agenda.

The roots of this lie ties back to the Rothschild’s who stole the land of Palestine in a deal made with Britain called the Balfour Declaration where the Rothschild Zionists promised to bring the U.S. into World War 1 if the British would give them the land.

Here is a speech given in 1961 by a former Jew, Benjamin Freedman, who explains what happened with the Balfour Declaration, World War 1 and World War 2.

Here is Eustice Mullins (researcher who discovered the secrets behind the Federal Reserve) explaining how the Rothschild’s created the land of Israel:

[…] the most powerful men in the United States were themselves answerable to another power, a foreign power, and a power which had been steadfastly seeking to extend its control over the young republic of the United States since its very inception. This power was the financial power of England, centered in the London Branch of the House of Rothschild. The fact was that in 1910, the United States was for all practical purposes being ruled from England, and so it is today. The ten largest bank holding companies in the United States are firmly in the hands of certain banking houses, all of which have branches in London. They are J.P. Morgan Company, Brown Brothers Harriman, Warburg, Kuhn Loeb and J. Henry Schroder. All of them maintain close relationships with the House of Rothschild, principally through the Rothschild control of international money markets through its manipulation of the price of gold. Each day, the world price of gold is set in the London office of N.M. Rothschild and Company.

Eustace Mullins (Author of “Secrets of the Federal Reserve”)

Do “Ashkenazi” Jews have a right to Palestine?

Not according to many historians, such as the Jewish historian Arthur Koestler, who wrote The Thirteenth Tribe. 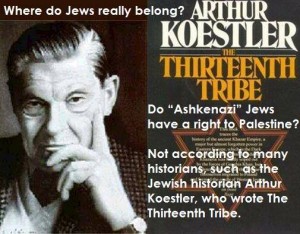 The word “Jew” refers to both a religion and a race. Using one word for these two very different concepts is as ridiculous as referring to a religion as “Chinese”.

DNA research confirms that 97% of “Jews” are NOT descendants of Abraham.

“Christians should not support the Zionist State of Israel” because it is not according to what God said in the Torah and it is nothing more than a political movement that has infiltrated Christianity.

According to The Preterist Archive:

What, then, are modern Jews? Modern Jews are people who choose to think of themselves as descendants of Israel. Most modern Jews are not semites, but are descended form Eastern European tribes that converted to Judaism in the middle ages. Arthur Koestler’s ‘The Thirteenth Tribe’ provides much information about this. Modern Jews do not worship the God of the Old Testament. They are either secular humanists, or else Talmudists, and the Talmud has no more relation to the Old Testament than does the Quran or the Book of Mormon.