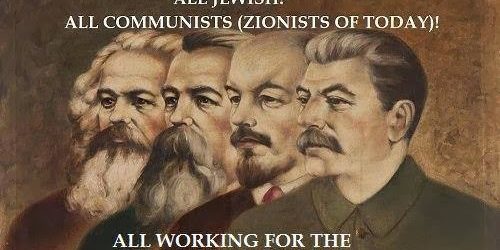 The Bolsheviks started the Communist/Red Revolution which overthrew Russia in 1917.

Karl Marx wrote the Communist Manifesto and he is Jewish:

“Since the Jews are the highest and most cultured people on earth, the Jews have a right to subordinate to themselves the rest of mankind and to be the masters over the whole earth… Judaism is communism, internationalism, the universal brotherhood of man, the emancipation of the working class and the human society… It is with these spiritual weapons that the Jews will conquer the world and the human race. The races and the nations will cheerfully submit to the spiritual power of Judaism… The communist soul is the soul of Judaism. Hence it follows that the triumph of communism in the Russian Revolution is the triumph of Judaism” — Rabbi Harry Waton, ‘committee for the preservation of the Jews’, NY, 1939

Bolshevism and Zionism is a difference without a distinction

Bolshevism and Zionism Are Ideologically Indistinguishable

The Marxist Subversion of Western Civilization