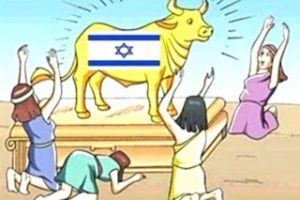 Pastor Chuck Baldwin from Liberty Fellowship tells the truth of how Zionism will continue to destroy the world in their quest to rule the entire world and to build their 3rd temple.

Chuck isn’t exactly correct on his 3 points about the only things that will restore our liberties. His 3rd point is dead on about how the fake “christian-zionist movement” is to blame for the destruction of our Republic and for the ultimate takedown of our nation and “if” we could ever turn them around to realize that the apartheid nation/state of Israel is our enemy then we might stand a chance.

His #1 and #2 points are not, necessarily, full of the truth.

#1 – He claims that the era of the Founding Fathers was one of more Biblical times and he goes on to declare that Jesus Christ blessed our nation and this is false. This is the teachings of David Barton who tells these half-truths, as well. The United States was not created as a Christian nation because many of the founders were Freemasons and God didn’t bless our nation anymore than he did the nation/state of Israel. The Holy Scriptures are VERY clear that God is the Creator of ALL people and that He loves all nations and all races, creeds, etc., not particular nations. Chuck is wrong in preaching about how the Founding of our nation was, somehow blessed, because it wasn’t.

#2 – Pastor Baldwin also claims that the answer to save our liberties is to return to “Reformation Preaching” but this can be disputed when it is understood how the Judaizers manipulated Martin Luther and other “Protestants” during the Reformation period of history. Martin Luther couldn’t stand the Zionists and he wrote a book about how awful they were – TheJewsAndTheirLies-Luther

In this video (starting at the mark of 1:06:54), Father Jenkins of the Immaculate Conception Church in Cincinnati, Ohio explains how the Judaizers have been successful at infiltrating Christianity with their man-made worship and their push to point Christians toward the Mosaic Laws of Moses and away from the teachings of Jesus Christ.

As 2018 begins, Christians have much to learn about the plans of the Zionists to build their 3rd Temple and here is there progress:

**The Staff of Church Eclipse prays for the awakening of Christians