Political Zionism is NOT Christianity!

The false teaching of the “christian-zionist movement” has one central tenet running through all of it’s fake churches and that is the “Scofield Bible.” Most followers of these false churches do not even realize that they are being taught from this Bible because it isn’t sitting in their pews.

Any church who is teaching that the secular state of Israel is a fulfillment of “Biblical prophecy” is lying to you. Be sure to look closely at their foundation to see if they are teaching you this lie of political Zionism.

This great article – “The Scofield Bible: The Book that made Zionists of America’s Evangelical Christians” explains it well when it states:

Who is Cyrus I. Scofield?

Here is a great article that explains how the Zionist-Created Scofield ‘Bible’ has infiltrated Christianity in America. It shows how the World Zionist Movement knew that they had to twist the words of the Scriptures to get America to stay out of the way of their plans to rule the world.

And who was Cyrus Scofield?

As a young con-artist in Kansas after the Civil War, he met up with John J. Ingalls, an aging Jewish lawyer who had been sent to Atchison by the “Secret Six” some thirty years before to work the Abolitionist cause.  Pulling strings both in Kansas and with his compatriots back east, Ingalls assisted Scofield in gaining admission to the Bar, and procured his appointment as Federal Attorney for Kansas.  Ingalls and Scofield became partners in a railroad scam which led to Cyrus serving time for criminal forgery.

While he was in prison, Scofield began studying the philosophy of John Darby, pioneer of the Plymouth Brethren movement and the “any moment now” rapture doctrine.

Upon his release from prison, Scofield deserted his first wife, Leonteen Carry Scofield, and his two daughters Abigail and Helen, and he took as his mistress a young girl from the St. Louis Flower Mission.  He later abandoned her for Helen van Ward, whom he eventually married.  Following his Illuminati connections to New York, he settled in at the Lotus Club, which he listed as his residence for the next twenty years.  It was here that he presented his ideas for a new Christian Bible concordance, and was taken under the wing of Samuel Untermeyer, who later became chairman of the American Jewish Committee, president of the American League of Jewish Patriots, and chairman of the Non-sectarian Anti-Nazi League.

Untermeyer introduced Scofield to numerous Zionist and socialist leaders, including Samuel Gompers, Fiorello LaGuardia, Abraham Straus, Bernard Baruch and Jacob Schiff. These were the people who financed Scofield’s research trips to Oxford and arranged the publication and distribution of his concordance.

It is impossible to overstate the influence of Cyrus Scofield on twentieth-century Christian beliefs. The Scofield Bible is the standard reference work in virtually all Christian ministries and divinity schools.  It is singularly responsible for the Christian belief that the Hebrew Prophecies describe the kingdom of Jesus’ Second Coming, and not the Zionist vision of a man-made New World Order.

And it is precisely because Christians persist in this belief that they remain blind to the reality of Zion.

Scofield served as the agent by which the Zionists paralyzed Christianity, while they prepared America for our final conquest. 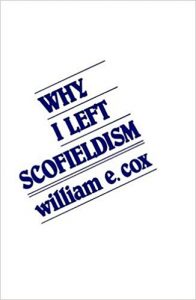