Now that you understand the truth
– that the Vatican has been infiltrated by the Judeo/Masonic occult – …What should you do about it?

There are 2 things that any TRUE Catholic can,
and should, do:

1. ONLY attend the Tridentine (Latin) Mass

**This powerful duo is the answer to protect yourself during this extremely difficult time in the Church’s history.**

Here is a place where you can pray the Rosary for the return of a TRUE POPE!

So, Why the Latin Mass? Here are the reasons – EXTREMELY IMPORTANT to understand.

Why The Traditional Latin Mass?

Sadly, in our modern times, we have been robbed of the TRUE Latin Mass but remember that the Church is still there, it is just under “eclipse.” This short video shows excerpts from the 1973 movie, “Conflict.” 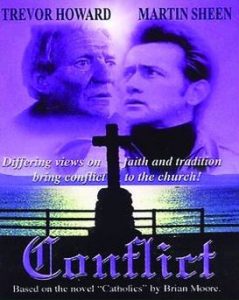 It is VITAL that you are “Being a Real Catholic
while the Church is in Eclipse” so make sure that you, fully, understand these gifts from God during such a tumultuous time. God has not, and will never, abandon us. The evil men of satan have just been working very hard in our modernistic times.

Begin to protect yourself by getting a copy of the REAL Douay-Rheims Bible from the original Douay Fathers that has been tainted over the years with revisions like the “Challoner” and “Haydock” revisions. It is VITAL that we have, in our possessions, the TRUE Word of God.

PLEASE do yourself, and your family, a good service to Our Lord and order the REAL Douay-Rheims original Scripture – http://www.realdouayrheims.com/

The Catholic Encyclopedia of 1909 A.D. states:

“Although the Bibles in use at the present day by the Catholics of England and Ireland are popularly styled the Douay Version, they are most improperly so called; they are founded, with more or less alteration, on a series of revisions undertaken by Bishop Challoner in 1749-52 . . .

The changes introduced by him were so considerable that, according to Cardinal Newman, they almost amounted to a new translation. So, also, Cardinal Wiseman wrote, ‘To call it any longer the Douay or Rheimish Version is an abuse of terms. It has been altered and modified until scarcely any verse remains as it was originally published.’ In nearly every case Challoner’s changes took the form of approximating to the Authorized Version [King James]. . .“

Does all of this still sound like some Conspiracy to you?..then read “Conspiracy! Meet Six High-Profile Traditional Catholic Conspiracy Nuts!”…and…

“Ask yourself on whose side you’d rather be on Judgment Day: that of countless Catholic Popes, saints, and martyrs, who in their writings and teachings warned us against the nefarious plots devised by the Church’s enemies for her undoing — or on the side of the “hear no evil, see no evil” Novus Ordo apologists like Keating, Madrid, Shea, Armstrong, Longenecker, and the entire Ecumenical-Modernist EWTN gang? This should be a no-brainer.”

Also, here are some recommendations of Traditional Catholic Books and References such as:

The book is rather pricey at $200 on Amazon so download the free version of it, above, while you still can.

Also, this link is a GOLD MINE of information on Traditional Catholicism:

Within the ‘Traditional Catholic’ movement, there are many choices to make and many flavors of what the chaos looks like. As Jim Condit Jr. always says, we must sift through the schizophrenia of it all and it can be very difficult to find the truth. If the goal is to stick to the dogma and tradition of the Catholic Faith then the only position among the chaos that holds TRUE to the infallible faith started by Jesus Christ is the position of sedevacantism…there is no debate.