In the international community, the “Rothschild Zionist” state of Israel has been accused of treating the Palestinians in such inhumane ways that many claim it is an ‘Apartheid’ situation.

Look at how the land has been taken away from the Palestinians since the British gave them the land: 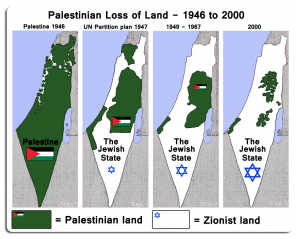 Professor Noam Chomsky explains how it’s “much worse” than an Apartheid situation and he talks about the BDS movement and the Presbyterian Church-USA who has signed onto support BDS:

*Notice how Chomsky pointed out that the public opinion of the world is one that thinks the United States is “the greatest threat to world peace” and people see the U.S. as the terrorists of the world in their support for Israel.

Israel is consistently in violation of international law and is often listed as a threat to human rights and has been accused of committing war crimes.

Here is a list of articles about how they violate basic human needs:

Here is the UN Human Rights Council report of the 2014 Gaza War which documents some of the possible war crimes committed by Israel. Norman Finkelstein (scholar/professor/activist on Israel) said the report “grossly underestimates what happened” and was very “tepid” towards Israel. The report does say that “the blockade of Gaza must UNCONDITIONALLY end” and that it must!

Couple that with the fact that in July, 2015, “the US was the only country in the world to oppose a resolution calling for Israel to be held accountable for war crimes” and it reinforces why the world sees the U.S. government as the terrorists of the world. 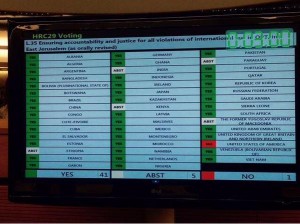 U.S. vote against “ensuring accountability and justice for all violations of international law” in the Occupied Palestinian Territories (OPT).

Now, in October of 2015, Putin has exposed all of this to the world and “Checkmated the Israeli-American Terror Machine“, and the situation in Syria “likely marks the end of their ability to manipulate America to fight any more wars for Israel and the Rothschild Khazarian Mafia (RKM).”