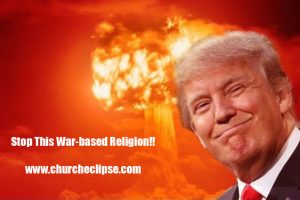 and “Alt-Right” movements just pushed us closer to WW3

Many Trump supporters are shaking their heads and choking on their hopes as Trump dangerously jumped into the geopolitical war of the Mideast in a far worse way than Obama even did. Trump’s decision to bomb Syria, after an unfounded accusation of Assad using chemical weapons on his own people, is one of the most aggressive acts of war that we’ve seen since Bush went into Iraq with no proof of any threat against us. This really is no surprise to many of us who have connected the dots to those who surround Trump and how they are neocon war-hawks that make the Bush administration appear mild.

Now that Trump has shown to be the same as all the other war-hawks with the attack on Syria, many in the Alt-right are furious with him and saying how this “may mean that he is utterly compromised” and how he has Betrayed! his campaign promises, and how he is using “wag the dog” tactics and they act surprised – but why? None of these things should be surprising because Trump told everyone, exactly, where his dedication lies…and it isn’t with making America great again.

Who are the Neocons?

Who, really, is this group called the “Neocons?” The confusion of what this actually means is due to the fact that this word gets thrown around a lot and many think that it only represents the leftist political viewpoint when that isn’t the case, at all. The term “Neocon” isn’t just some label that the people created, it is their own term for themselves and it describes a very specific group of people with the same goals in mind. Ron Paul defined the Neocons 5 years ago when he called them out by name. Neo-conservatism is a “fundamentally new version of American conservatism” and the BBC released a documentary about the movement. In their book “The Israel Lobby,” John Mearsheimer and Stephen Walt describe the definition as: “The Neoconservative movement has been an important part of American intellectual and political life since the 1970’s, but it has drawn particular attention since September 11. This group has been prominent in shaping the Bush administration’s unilateralist foreign policy, and especially the ill-fated decision to invade Iraq in March 2003. Neoconservatism is a political ideology with distinct views on both domestic and foreign policy, although only the latter is relevant here.” The authors summarize the definition by stating, “Neoconservatism, in short, is an especially hawkish political ideology” (p. 128-129).

Basically, any American politician who is Pro-Likud party is a Neocon. Pat Buchanan described it well when he said they have a “passionate attachment to a nation not their own,” meaning Israel. The late Congressman, Jim Traficant, said “Israel Controls America” and it is due to the Neocons and their foreign policy.

The Neocons have been extremely clear of their plans to take over the U.S. Foreign Policy for the “Greater Israel Project” and this is documented well in several places, including the “Project for New American Century (PNAC) documents” which detail the plans of the Neocons to balkanize the Mideast nations. They have to remove Assad from power because Syria and Iran are the last two on the chopping block. Remember, it was General Clark who explained that the Pentagon planned to “takeout 7 countries in 5 years.”

The big connection our failed foreign policy to the Zionists is in analyzing whether or not Neoconservatism is a Jewish Movement? As Kevin MacDonald pointed out in this excellent paper, historically, the Neocon movement was founded and influenced heavily by Leo Strauss and in his section about Leo Strauss, MacDonald says, “it is quite clear that Strauss understood that neither communism nor fascism was good for Jews in the long run. But democracy cannot be trusted given that Weimar ended with Hitler. A solution is to advocate democracy and the trappings of traditional religious culture, but managed by an elite able to manipulate the masses via control of the media and academic discourse.”

As Congressman Ron Paul was one of the first to expose, this attack on Assad in Syria is nothing more than another “False Flag” for “Israel”

…and Dr. Paul isn’t the only one telling the truth on it. Paul Craig Roberts points out how Trump has already “surrendered to the DC establishment” (i.e., the Israeli Zionists) and he asks if Putin will as well?

Lawrence Wilkerson (former Chief of Staff to Colin Powell) calls the strike “a hoax” explaining that it is another “Gulf Tolkien incident” (false reason to start the Vietnam War) and says that Trump is “taking advantage of the moment” and that this incident is nothing more than a group of people who “lie, cheat, steal” and “will do anything to get what they think is necessary…and at the bottom of what most of them think is necessary is protecting Israel.”

This is no different than what Hillary did in 2013 when the Obama administration tried to convince the American people that we should bomb Syria because they claimed (falsely) that Assad used chemical weapons on his people. In 2013, the UN even investigated the situation and showed the world how it was ISIS (created/trained/funded by U.S. and Israel) who was responsible for the attack.

Trump’s actions are unconstitutional and illegal in the international court

Rep. Gabbard (D-Hawaii) has explained how unconstitutional this move by Trump is and she seems to be one of the only ones in the U.S. government who thinks these situations should have factual evidence and should be investigated before jumping into World War 3.

Tulsi Gabbard met with President-elect Trump back in November, 2016 to try and talk to him about staying out of Syria but, sadly, it didn’t work. Pat Buchanan (who also says that the attack has “the marks of a false flag operation”), Ron Paul, Rand Paul, Congressman Justin Amash, and Tom Massie have also reminded the world that Trump’s Syrian attack was unconstitutional so where is the outcry from the American Patriots/Liberty Movement? Why was everyone up in arms when Obama did such trashing of the Rule of Law but now it’s, somehow, okay since it’s being done by a Republican? The hypocrisy is astounding.

Tilerson says that “steps are being taken” to topple Assad which is the plan spelled out in the PNAC documents described above.

Trump’s attack is illegal and Putin will not put up with it.

ISIS was created, trained, and funded by Israel/U.S. as Ken O’Keefe points out and the Zionist plans will destroy our sovereignty and, perhaps, destroy the world if this leads to WW3.  As Ken, consistently reminds us, all of these traitors (including Trump now) need to be arrested for treason to the Constitution but only the American people can do that by standing up. Isn’t it time that the American people understand that we are being ran by a shadow government that is ran by Israel and that no politician is able to put “America First,” least of all Trump.

Donald Trump is playing “Israel First” instead of “America First”

The latest news on all of this mess is that the former CIA officer – Robert David Steele – exposes McMaster as “a traitor,” Jared Kuschner as “possibly compromised,” and John McCain & John Brennan/McMaster, along with the Israelis and the Saudis, who have all “betrayed the American public” and says “we have to ask ourselves, is Donald Trump now playing ‘Israel First’ instead of ‘America First’?”

***SEE NOTE AT THE BOTTOM ABOUT THIS VIDEO BEING REMOVED***

He points out that the stage was set for this attack in Syria by John McCain and that “we are quite certain that John McCain is in the state of treason against the United States government…and the American people, of course.”

So, as you can tell from several former Congressmen, CIA Officers, White House Staff Members, etc. it should be clear to the American people that we have a shadow government that is focused on serving the needs of Israel in regards to foreign policy, economics, and politics instead of focusing on what is best for America. Trump wasn’t really speaking the truth when he said that he would “Make America Great Again” because his commitment has always been to Israel and he revealed this to the world during his campaign when he promised to “move the American embassy to the eternal capital of the Jewish people, Jerusalem,” and when he said, “I am the best thing that ever happened to Israel.” The White House is controlled by top Zionists and Trump’s speech to AIPAC made his dedication to Israel very clear.

The First Solution: Christians MUST unite and stop the C-Z Movement!

Zionist Jews of modern-day Israel are the bankers who own the governments of the West, all of the media, and they are on a war mission of ultimate supremacy because their “Holiest Book” (i.e., The Talmud) tells them to do so. This notion of racial supremacy over other nations who are not in their tribe is NOT the teachings of Jesus Christ, at all!

The C-Z movement funds millions of dollars that go to Israel to support their wars against humanity. Charles Carlson, accurately, describes the C-Z movement as a “war-based religion”. Why are Christians supporting the idea of more wars? Wars in the name of Christ are a horrible idea because Jesus said “blessed are the peacemakers for they shall become the children of God” (Matthew 5:9).

This “War-based Religion” is very dangerous to the idea of peace in the world because of the large influence that it has on political policies. The combination of the C-Z movement in conjunction with the Israel Lobby and the powerful influence of all of the money that flows from these forces to support a pro-war foreign policy is astonishing! As explained by Bill Dale, “A gulf is developing between the foreign policy perceptions of many Americans and those of our European allies, as well as of Islamic countries. Unless a counter force develops, Washington will not be able to support with consistency a policy in the Middle East involving compromise—the only one that can bring peace.” This harsh reality shows the political power of Zionism and how it has infiltrated most churches in America and that is our entire mission of the ‘Church Eclipse’ website because we hope to help people to connect these dots and realize how they are being misled.

If anyone reading this article wants to accuse our Church Eclipse organization of being “anti-semite” (which is a trick they always use), they might want to think again because we also agree with what Wilkerson finishes with in the video above where he points out that “we are setting up a condition where Israel is going to cease to exist…we are creating the most dangerous possible situation for Israel.” As Christians, we should pray for those supporting Israel because their war crimes against humanity are not going to end well.

Many are waking up to realize that “dispensationalism” is a false Christian theory and that fighting wars for Christ is the antithesis of what Christ preached when he commanded that we love each other. If you are awake to the dangers of ‘christian-zionism’ then please join our cause and do what you can to try and slow down the beast of war and world domination. We welcome your efforts in any ways you see fit. God Bless.

This article has been edited only to embed the videos that youtube has been removing.

*** The video of Robert David Steele keeps being removed by youtube so here is a link to his website (http://robertdavidsteele.com/) where you can contact him, as a primary source, to back up this article if you would like. Also, here is where he explains how the #googlegestapo is part of why these things on the internet continue to disappear – https://153news.net/watch_video.php?v=9G27N5RYB4YK

This is another link to an article which explains some of what the video said: http://www.theeventchronicle.com/syria/ex-cia-robert-david-steele-deep-state-versus-donald-trump/