Catholics and Non-Catholics should understand the message of Fatima that is so VITAL in recognizing the evils of Communism brought on by the Bolsheviks. It is the key to understanding the great wars and what the future holds. This film describes it best for all people irregardless of their religious worship.

If you are a modern Novus Ordo Catholic, you probably don’t know much about what happened at Fatima, Portugal. This is because they want the story covered up and silenced.

To learn the beautiful story of Fatima and to heed the warning given, Father Gruner is the best place to start. Father Gruner is called the “Fatima Priest” and he has worked hard over the last 25+ years trying to remind people of the truth of what happened in 1917.

Ever since the Pope was switched in 1958, the Counterfit Church has kept the secret of Fatima silenced and it still is kept from being taught to young children and in the modern parishes. Why? Obviously, they don’t want the faithful to know of their backroom deals with the devil. The message from our Lady of Fatima goes against an agreement they made with Russia and they don’t want us to know about it. That’s right. In 1962, the Vatican signed a secret agreement with Moscow, the “Metz Pact”. “This pact was a formal agreement signed by the Vatican Secretary of State which forced the Church not to condemn the errors of Russia anymore” (-Father Gruner. p.18).

http://www.traditioninaction.org/HotTopics/a007ht.htm
1960 was when the 3rd secret of Fatima was supposed to be revealed. This is when the Virgin Mary said that things would “be clearer then”; however, instead of the secret being revealed, Pope John XXIII (first Anti-pope of the Counterfeit Church) did nothing. He read the secret and gave a press release saying it would probably never be revealed – Here’s the story.

In 2012, Newsmax reported on the issue and said:

“According to a number of historians, “irrefutable evidence” claims to explain the reasons behind the absence of any reference to Communism in the documents. Pope John XXIII strongly wanted members of the Russian Orthodox Church — then deeply entangled with the Kremlin and the KGB — to take part in the council, and he was prepared to make an extraordinary concession to secure their presence: to refrain from making “hostile declarations” on Russia.”

So what is so important about the secret that they want it silenced? Watch this important video that explains the biggest fraud perpetuated onto the faithful:

This, phenomenal, book explains so many things about Fatima and how we are witnessing the “Devil’s Final Battle.” Here is the website – http://www.devilsfinalbattle.com/ 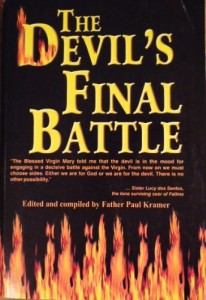 The Message of Fatima