The United Electrical, Radio and Machine Workers of America – known as UE – has voted to back the Palestinian call for boycott, divestment and sanctions (BDS) on Israel.

This makes it only the second national union in the United States, and the largest so far, to take such a step.

Palestinian trade unionists and activists are warmly welcoming the move.

UE represents more than 30,000 workers across the country in a range of private and public sector occupations. 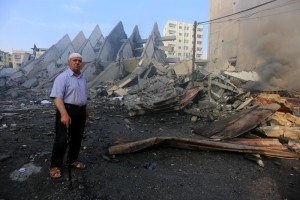 Fire is seen as a Palestinian man walks amidst the remains of a tower building housing offices, which witnesses said was destroyed by an Israeli air strike, in Gaza City August 26, 2014. Israeli air strikes launched before dawn on Tuesday killed two Palestinians and destroyed much of one of Gaza’s tallest apartment and office buildings, setting off huge explosions and wounding 20 people, Palestinian health officials said. Israel had no immediate comment on the attacks that took place as Egyptian mediators stepped up efforts to achieve an elusive ceasefire to end seven weeks of fighting. Israel launched an offensive on July 8, with the declared aim of ending rocket fire into its territory. Photo by Mohammed Asad

“We reached a breaking point when Israel launched the war on Gaza in 2014, killing over 2,000 people including 500 children,” Carl Rosen, president of UE’s Western Region and a member of the national executive board, said in an emailed statement from the union, explaining why the resolution came at this year’s UE national convention in Baltimore in mid-August.

Rosen added that backing BDS “is a necessary step for labor to take in order to bring about a peaceful end to the conflicts there.”

UE notes that the resolution “points to Israel’s long history of violating the human rights of the Palestinians, starting with the ethnic cleansing of 750,000 Palestinians in 1947-48 that turned most of Palestine into the State of Israel.”

The resolution calls on the US to end all military aid to Israel and for pressure on Israel “to end the occupation of the West Bank and East Jerusalem and the siege of Gaza and negotiate a peace agreement on the basis of equality, democracy and human rights for the Palestinian and Israeli people, including Palestinian self-determination and the right of return for refugees.”

It “endorses the BDS movement and urges the union at all levels to become engaged in BDS and the movement for peace, justice and equality between the Palestinians and Israelis.”

Among the delegates who spoke in support of the resolution was Autumn Martinez of Local 255 in Vermont.

Martinez said she had met Palestinian trade unionists at the World Social Forum in Tunisia earlier this year and learned from them of conditions in the occupied West Bank and Gaza Strip. “It’s absolutely disgusting what is going on. Free Palestine!” she said, according to the blog Portside.

Founded in 1936, UE is not affiliated with the AFL-CIO, the major US labor federation that worked closely with the US Central Intelligence Agency during the Cold War to subvert left-wing movements and governments around the world.

Angaza Laughinghouse, vice president of North Carolina Public Service Workers Union UE Local 150, told The Electronic Intifada that he saw parallels in his state’s total prohibition of collective bargaining for public workers and some of the conditions faced by Palestinians.

Laughinghouse, whose local was one of several that sponsored the resolution, also said support for BDS was rooted in a tradition of Black solidarity with Palestinians and other peoples fighting for liberation.

“Some of our members are Palestinian,” Laughinghouse said. “Many are immigrants from other nations. Many are African Americans and Latinos. We can identify with this question of the right to self-determination, the right to sovereignty.”

“We as Black people also know the long history of colonial settlements, whether it is apartheid South Africa or Palestine,” Laughinghouse added.

He said he learned about the Palestinian struggle when he worked alongside Palestinians on New York construction sites decades ago.

“Many African Americans began to identify with Palestinians because we were struggling against racist, apartheid Jim Crow segregation,” Laughinghouse recalled. “We saw commonality as the US has historically supported the settler state of Israel, just like many Americans in the 1950s and 1960s supported Jim Crow and segregation.”

“Palestinians should be a part of Black Lives Matter, because Palestinian lives matter,” he said, referring to the protests across the United States against police killings of African Americans.

“We attended the rallies against the recent Israeli bombings in Gaza and we welcome Palestinians in our rallies,” he added.

Laughinghouse is among more than 1,000 people who signed the recent Black for Palestine solidarity statement.

“UE’s endorsement of BDS shows that, despite the extreme intimidation, bullying and/or cooptation practiced by Israel and its powerful lobbying groups in the US against critics, let alone advocates of a boycott, BDS is spreading the fastest in the US,” Omar Barghouti, a Palestinian human rights activist and co-founder of the BDS movement, wrote to The Electronic Intifada.

“It is inspiring to see growing support from US trade unions, including the Industrial Workers of the World, which endorsed BDS in 2010, and UAW 2865, the California-wide union of teaching assistants that earlier this year adopted divestment from the Israeli occupation with a two-thirds majority vote,” Barghouti added.

The Palestinian Postal Workers Union has written to UE in response to the resolution.

“We would like to express our deepest appreciation for the courageous resolution … in support of our right as Palestinians to live in peace and dignity as equals on our lands,” the Palestinian union said, according to UE’s statement. “We sincerely hope that other national unions in the US and many other countries will follow in your footsteps.”

Learn more about the BDS Movement.