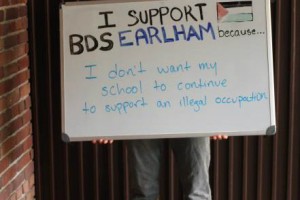 Indiana students vote to divest from companies over Israel links

Last week, the student senate at Earlham College, a Quaker liberal arts institution in Indiana, passed a resolution demanding divestment from US companies that profit from Israeli violations of Palestinians’ rights.

The resolution was passed by consensus — requiring the approval of all members of the student government — and targets the college’s investments in Motorola Solutions, Hewlett-Packard and Caterpillar.

Hashem Abu Sham’a, a student senate co-president and a member of the BDS Earlham campaign — which supports the Palestinian call for boycott, divestment and sanctions against Israel — said that the consensus process was challenging in the past.

However, “this semester, we felt that the student government was more prepared to assess the resolution — precisely because they were willing to take very clear stances on difficult political issues,” he told The Electronic Intifada.

Students say that unlike most private institutions which guard their financial privacy, information about the college’s direct investment holdings are fairly transparent and not difficult to access.

Moreover, the college allows for student involvement in administrative procedures and guidelines.

Fellow student and BDS Earlham campaigner Alex Cook said that from looking at the college’s holdings, they found that the investments in companies that students identified for divestment “only make up less than .0001 percent of our endowment.”

“This is a pragmatic step that we view the school being able to take in terms of divesting from these companies,” Cook added, “since it would not cost the school a great deal financially.”

In a press release, BDS Earlham says that “this decision on behalf of the senate served as a decisive victory after numerous years of struggle.”

The divestment campaign has been growing since students began researching the divestment process in 2010, Cook said. He added that this was the third time that a resolution had been presented to the student senate since 2011.

In 2013, the student senate chose to cancel a planned all-school meeting on the issue of divestment “out of fear of not remaining ‘neutral’ on a controversial issue,” BDS Earlham states.

Abu Sham’a said that the rhetoric of “neutrality” is an attempt to silence marginalized communities and fails to address unequal power dynamics around Israel’s occupation.

“The question of silencing Palestinian students by investing in these companies, by investing in the structure of occupation and oppression, is never raised,” he said. “So we tried to address this during Israeli Apartheid Week [a global series of events intended to raise awareness of Palestine and support for the BDS campaign] and show students that essentially what we’re asking Earlham to do is to stop being complicit in the Israeli occupation — and stop silencing me as a Palestinian student on this campus.”

A wide spectrum of student organizations expressed support for the divestment campaign, fostering “an environment of support and solidarity among the student body,” Earlham BDS adds.

Cook explained that an important part of the BDS campaign is “using the divestment conversation to continue to center a conversation about Palestine on campus — and also have that conversation be one that’s focused on human rights.”

He said that BDS Earlham campaigners and Students for Peace and Justice in Palestine have joined forces with the LGBTQ group on campus, Black student groups, Students for a Free Tibet and the Latino Student Alliance to protest mass incarceration, arbitrary detention and state violence from the US to Palestine.

“One aspect to which we continue to appeal around the BDS campaign is the testimony of the Quaker Friends and the extent to which they have historically been a religious group that have stood for social justice, peace and human rights,” Cook said. “It’s been central to Earlham’s history.”

Students are making sure that the college “lives up to our legacy of social justice,” he said.

The resolution will now head to the board of trustees and the Socially Responsible Investment Advisory Committee at the college. Students intend to keep pressure on the administration to implement divestment.

Abu Sham’a says that Students for Peace and Justice in Palestine and BDS Earlham are “continuing to educate the student body about the goal of this movement” as they expand their connections with other campus Palestine solidarity chapters in Indiana, Quaker affiliates and members of the larger Indiana Palestine solidarity network.

Students say it is important that Earlham aligns with other Quaker institutions and communities which have adopted strong stands against Israel’s violations of Palestinians’ rights.

In March 2008, the board of the American Friends Service Committee approved an “Israel-Palestine investment screen” and a “no-buy” list.

In 2012, the Quaker Friends Fiduciary Corporation divested funds from Caterpillar, Hewlett-Packard and Veolia.

That same year, Earlham students successfully campaigned to remove Sabra brand hummus from their dining services. Sabra is a frequent target for BDS campaigns because it is partially owned by the Israeli company Strauss Foods, which actively supports the Golani Brigade, an “elite” unit in the Israeli army which is responsible for grave human rights abuses.

“Something that we’ve tried to emphasize here at Earlham is that this is what we have in our power to do — to stand in solidarity with Palestinians and to be a part of this larger international movement,” Cook said.

“We see [the resolution] fitting within the context of the mission of this school,” Abu Sham’a added, “and the values, principles and practices that guide our community.”